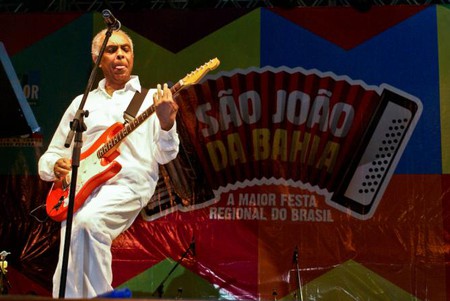 After giving a lecture at MIT, Brazil’s musician minister Gilberto Gil went to Silicon Valley to meet with a team of top executives of the computer world. Gil sat for hours with the likes of Jerry Yang, founder of Yahoo, Phillip Rosedale, creator of Second Life, and Joel Hyatt, Al Gore’s partner at Current TV.

The subject was the future of technology. The minister wants to learn deeply about the impacts of the digital world in the world’s cultures. The ministry has a department working exclusively on the subject and has emphasized the development of projects towards the globalization of culture.

Rosedale is now studying the possibility to include the National Observatory on Digital Culture of Gil’s Ministry as part of Second Life. Gilberto Gil who has been having problems with his vocal chords, will take a leave of absence of the Ministry for two months. Back in February, when he might resign.

Once (if) Gil leaves, will all the things he initiated go down the drain? Thinking about continuity of projects, Gil would like to leave his right hand man in his place, but rumor has it that President Lula, who would like to keep Gil in the job, will only replace him by someone also famous. Oh well…

A Green Heart to Save the Forest

Three Brazilian musicians were inspired by the environment and decided to make a CD. Nilson Matta wrote Green Heart, which became the title of the CD. and three other songs. Zé Luis wrote other four songs, and Paulo Braga, four more. It was released by New Orbita, an independent label, at Joe’s Pub in New York, with a very special guest, Toninho Horta, on the 17.

These Brazilian musicians come a long way. “We all drink from many wells,” says Nilson Matta, one of the best bass players around, who started playing classic music and confesses his admiration for Villa Lobos and Tom Jobim. Zé Luis’ quartet is well known in New York.

Zé Luis, an inspirational metal player particularly good with flute and sax, has played with the best Brazilian musicians, the likes of Caetano Veloso, Gilberto Gil, Gal Costa and Chico Buarque. Paulo Braga is called a master percussionist. Together they play to bring awareness to the needs of the planet, to keep our forests safe – they play for life. Green Heart is a must.

The Year My Parents Went On Vacation

A Good Feeling In The Air…

The Year My Parents Went On Vacation is the film representing Brazil for the Oscar’s. By January 10 a short list of 10 films will be out and on January 22 the five films qualified to compete will be announced.

According to Stephen Raphael, Oscar specialist hired by City Lights, “So far, The Year has been in all lists among the first eight, an excellent rate, considering it’s competing with other 64 films. We strongly believe it will make it to the final five.”

Director Cao Hamburger and producer Fabiano Gullane met in Washington with the Ambassador of Brazil in the first week of December. They were in New York for a week for some screenings, meeting the press and critics.

Paraty Will Have International Film Festival

Paraty, the charming historical city in the south coast of Rio de Janeiro, is going to have a film festival starting in 2008. Paraty is known as a cultural (and cult) place and its annual book festival attracts writers from all over the planet.

The first International Film Festival of Paraty will be in June of 2008. The producers are already taking care of the reform of the town’s only theatre to give it back to the city in style, for the festival.

Paraty has its own little history related to cinema. It has been an old time favorite to filmmakers, notably in the 70s and 1980s. “Gabriela,” based on the homonymous book by Jorge Amado, was in fact filmed in Paraty and not in Bahia, although the story took place in the city of Ilhéus, in Bahia.

Another famous film, “The Emerald Forest” was located in Paraty, despite the fact that it was about the Amazon forest. Paraty’s rainforest never left any room for doubt of the location of the film; the Amazon was in every mind of those who saw it. Director Ricardo Nauenberg starts filming “O Inventor de Sonhos” (The Inventor of Dreams) in Paraty comes March.

The film is about the changes that took place in the city of Rio de Janeiro since the arrival of the Portuguese kingdom in 1808. Producer Patrick Siaretta is getting ready to film in Paraty soon. Jeremy Irons and Natalie Portman will star the new film. And there is more coming.

It is not too premature to assume that the international film festival of Paraty will quickly become one of the Brazil’s more important events related to the film industry. Paraty has that quality about it; things tend to grow fast and attract the most sophisticated people, not just organizers and participants but a top of the notch audience as well.

Plural Walter Gets On The Road Before Filming “On the Road”

Before starting the film “On the Road,” Walter was on the road pursuing an old passion for cars, participating of the car race GT3 Brasil Championship in Interlagos, São Paulo. After hitting the road in South America with his “The Motorcycle Diaries,” Walter, who also did “Central Station,” is ready to hit the road in the US, to do a film based on the most famous of American books, Jack Kerouac’s “On the Road,” written in 1957.

No one less than Francis Ford Coppola and his Zoetrope will produce the film, with script by José Rivera. Coppola has had the rights to the book since 1979, because of the difficulty to adapt to the screen, but finally invited Salles, the right man for the right job.

Kerouac’s book, about a wild youth during a cross-country trip, kicked off the beat movement in the US.

After a three-year wait for the perfect spot, Brazilian stylist Carlos Miele opened his first store in Paris, at Saint Honoré Avenue, between Vendôme and Madeleine Squares. The wait was worthwhile, and now Miele has Chanel and John Galliano as neighbors.

That done, Miele is busy to launch his debut male collection, a look away from the extravagant ways of his creations that drive women out of their heads.

Going more towards the classic, he candidly told the press that in comparison, “man is the woman’s accessory.” In New York, Carlos Miele’s store, located on 14th St. in the meatpacking district, exhibits a touch of art that makes it one of the most enchanting fashion spots in Manhattan.

Brazilian oil giant Petrobras is going to Hollywood. This has nothing to do with the solid high financial investment the company has been throwing in the Brazilian film industry. The biggest of all Latin American oil company signed a branding contract to exhibit its logo and the alternative fuels it makes in a Hollywood mega production being launched in 2008.

Clara Angelica Porto is a Brazilian bilingual journalist living in New York.  She went to school in Brazil and at the University of Wisconsin in Madison. Clara is presently working as the English writer for The Brasilians, a monthly newspaper in Manhattan.